Branislav Mikitka and his story of how design-factory came to exist.

Behind the reality transformed from visualization there is always expertise and a bit of art. And who is behind design-factory, which has been on the Slovak market for over 25 years ? We have talked to the founder of design-factory and visionary Branislav Mikitka.

I couldn’t help but ask Mr. Mikitka about his journey into advertising and his story.

Perhaps as every second student I wanted to become very rich, by two years at the latest. At that time I studied at the Secondary technical school of graphics at Hellichova street in Prague. Advertising seemed like the perfect field where I could put my hands on and apply my skills. I was lucky to meet an old master who showed me the ropes and revealed how window dressing used to be done in the 1920’s. So I got my first job.

I was driving around on a motorbike with wooden boxes full of paint cans. Then I would spray beer on a shop window and stick aluminium foil on it. Somewhere I got hold of an old medical scalpel and took one of my mum’s sponges to apply the paint. I was after aluminium foils like crazy.  And only a crazy person would have trusted me with a job back then.

Something like a plotter, did not exist, no one had ever worked with plotter foils. It was a real thing when I bought my first roll. I would photocopy letters on it and then cut them out. And when I bought my first 5 metres of foil I was so full of myself. Then a friend of mine told me that everything I needed for a professional advertisement was a laser printer, plotter and computer. The very same friend then offered to pay me in advance for advertising I would do for him and told me that later I would continue to pay for the plotter in installments. I was in a dream, in a dream indeed, because I forgot to ask him about the price. So naive  was I, back then.

Three weeks later they called me and wanted to know where I wanted to have the plotter installed. So I hired a space that was 200m2 with one desk and one chair and waited for them to come.  This was the very first time I had seen a laser printer, computer or a plotter and as soon as they arrived I knew right away that my estimation of a necessary place was way off. At that time the down payment was 150,000 Korunas, so I had to put my parents´vineyard into foreclosure. And when money from a bank arrived in my account, I had an idea worthy of a young man and bought myself a car. Yet again, I had no money!
Well, in a nutshell, the beginnings were smile-provoking, partisan-like and very naive.

Cooperation with my first plotter was more like a trial and error method. I learnt it could only work with 4 fonts and the rest of the 20 fonts needed to be purchased, I had no idea there was something like a transfer foil, so all the cut-out letters got twisted and glued to one another. It was such hard labor. So I continued painting show windows with beer and paid more and more installments. 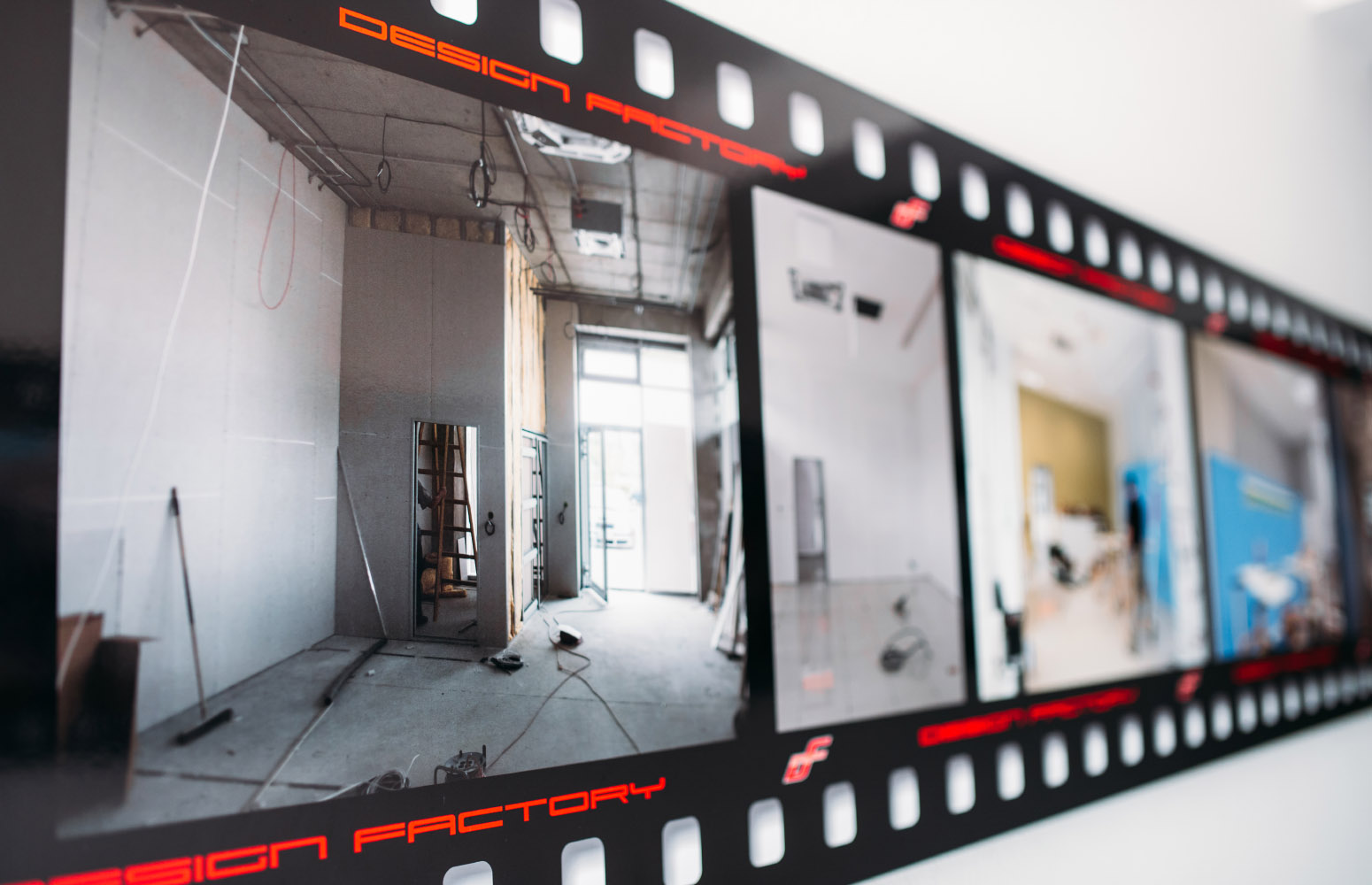 But then, the tables turned and the one-eyed became the king. That period must have given you a lot of lectures and your courage to venture into the great unknown must have been repaid in the form of a lot of jobs..

Yes, I got the first big jobs and I welcomed them all with great enthusiasm. My clients never knew that I often had no idea how to put my ideas and designs into reality. But I was lucky. Today, I have a fantastic team of colleagues who can cope with a lot of things, they are real craftsmen and their knowledge and skills often exceed their field of expertise.
We perform a range of carpentry jobs, we are able to illuminate letters….whatever a client wants.

I remember a job we did for Sasazu bar. Before they came to take the Heineken bar to install it my people had already figured everything out, everything was ready to go, illuminated and the beer tap had the much desired, frozen like effect and created a superb solitaire. So, the client simply got a turnkey beer bar.

I know that you were the author of the timeless interiors for Samsung. I remember writing about them. I entered this design into the EuroShop RetailDesign Awards for the most compelling concept. This job was already fully focused on the design of shops, not only advertising display devices with which you began your career. There was one, very typical prevalent element – oval-shaped round corners. Was that your favourite thing ?

That job from Samsung required us to learn how to make an arc as well as to master the technology of production from plastic materials, artificial stone or how to steam bend veneer. Because we had experienced some serious hiccups on the side of our subcontractors, we had to try all sorts of production ourselves, and finally, we came up with our own technologies. Yes, the round shape back then was not only my favourite thing, it proved to have timeless potential. Which producer can now say they have mastered the production of bent furniture ? 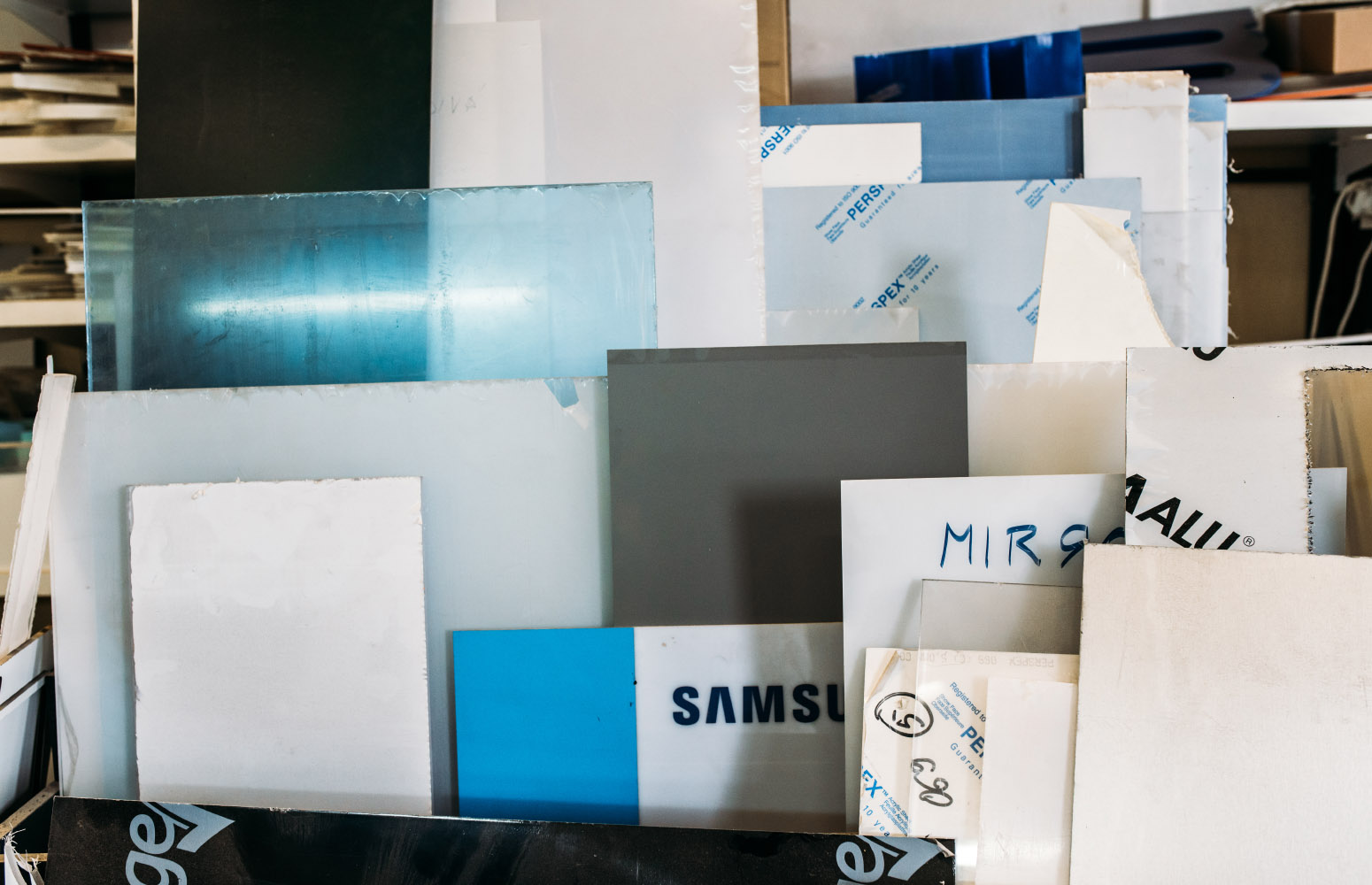 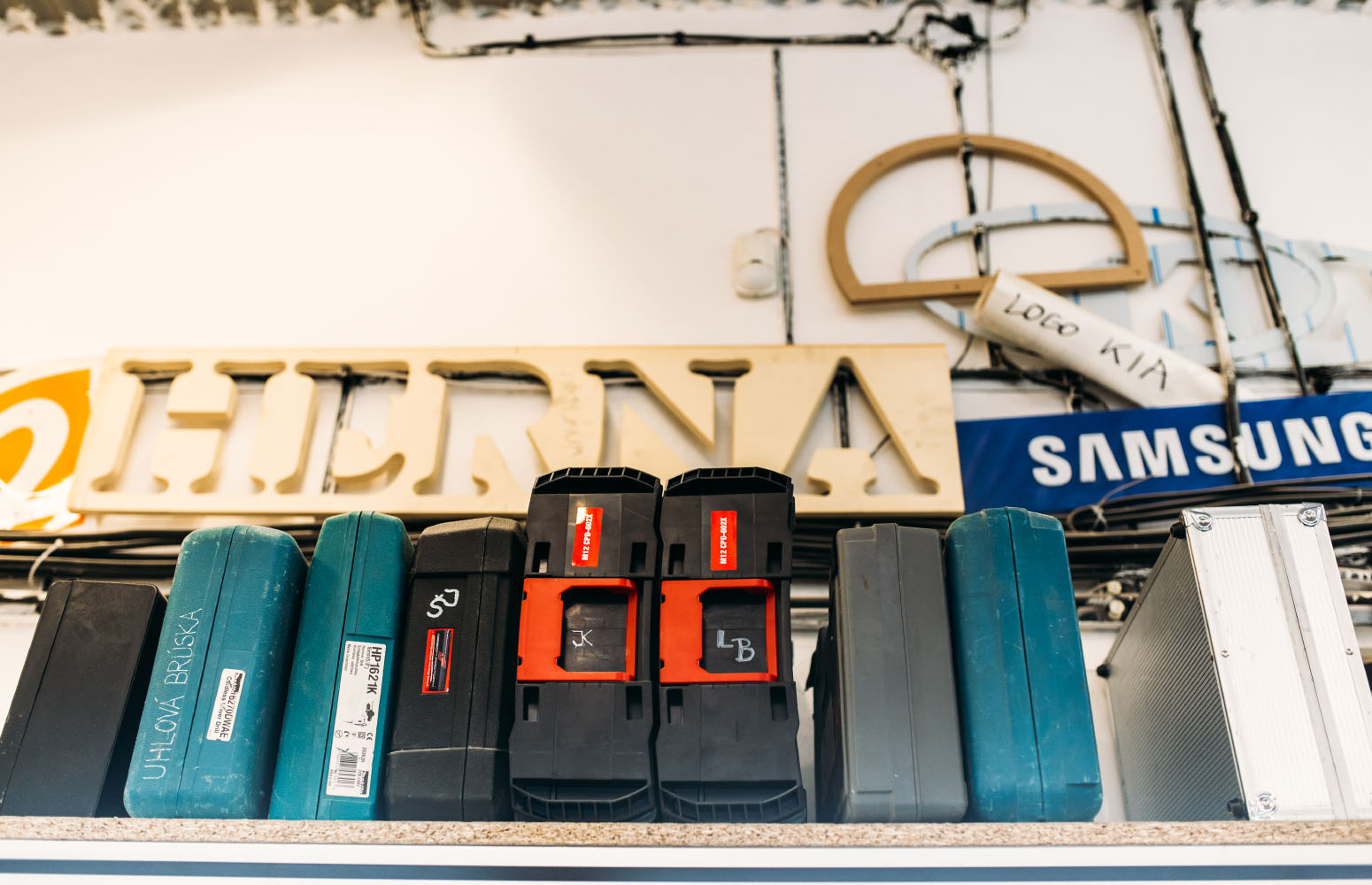 What other interesting projects have you worked on since Samsung?

Each and every project is a challenge. Our job is to create a very client-specific paint, print pattern or finish, or to make a unique design. We work with unusual combinations of colours and materials, we like to illuminate and we are real suckers for perfect surface finishings.

You can not tell the difference between our visualization and the real product. We make use of all we have learnt in advertising, woodworking or plastic processing. Our ideal client is someone who does not want or need an interior architect or advertising company, because we offer it all. We bring in creativity, ideas but efficiency too.

You have mentioned development of new surfaces. In your plant I saw samples of various surface finishings. I also remember writing about an interesting technology, mirror finishes. Can you talk about it a little ?

It was precisely this method of mirror finishing which sparked an idea to move our designs to a different level and to make 3d effects by means of different applications. The combination of such materials and the right technology gives us wings to come up with as many creative options as possible. We have mastered different production technologies, we know how to heat plastic, acrylic, artificial stone materials, we know how to form bend or vacuum form and therefore we and our architects and designers have all possible doors open to get into the craziest, most bizzare projects. We create visions which we can transform into reality and thus we consciously move the horizon. 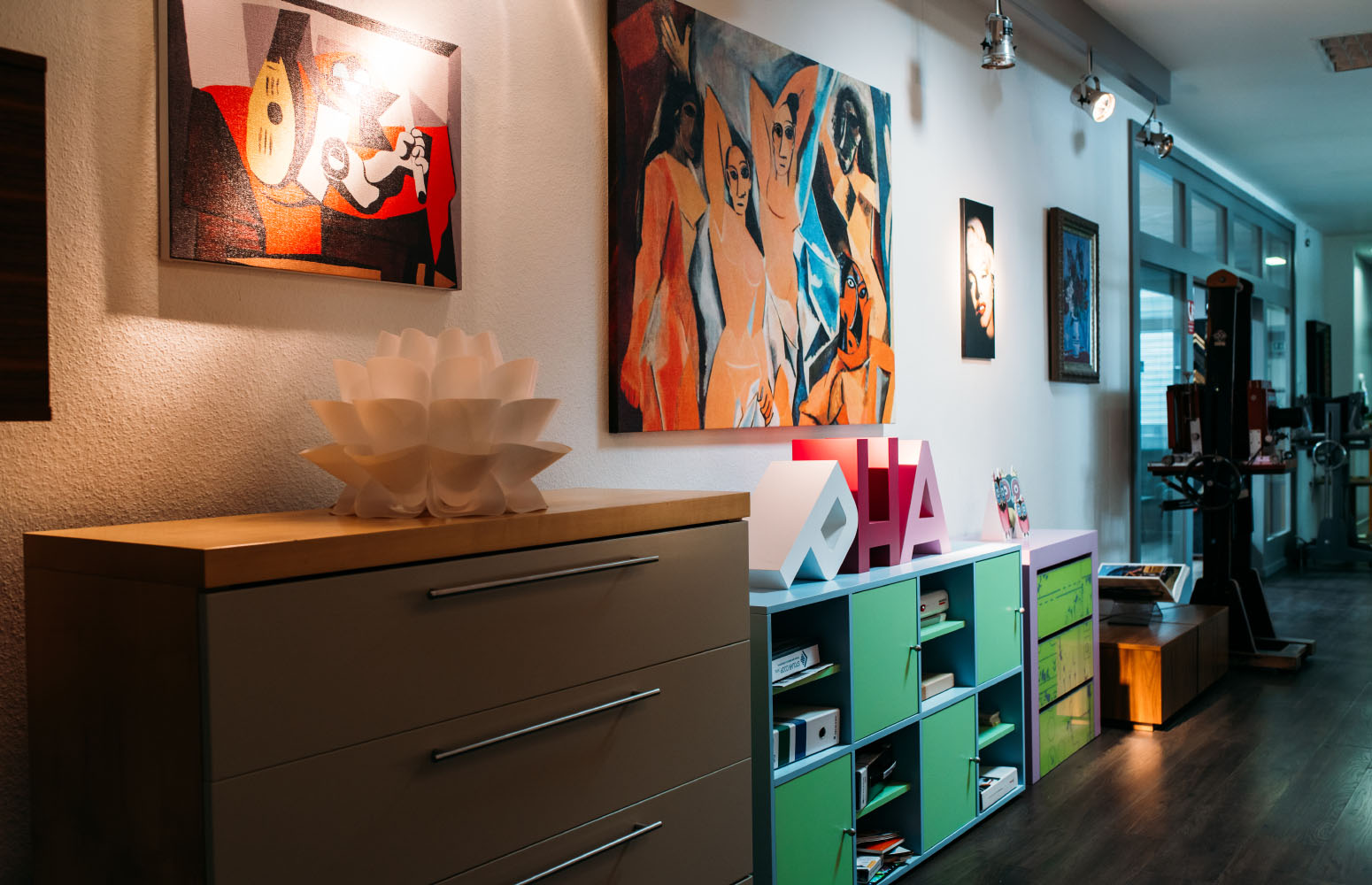 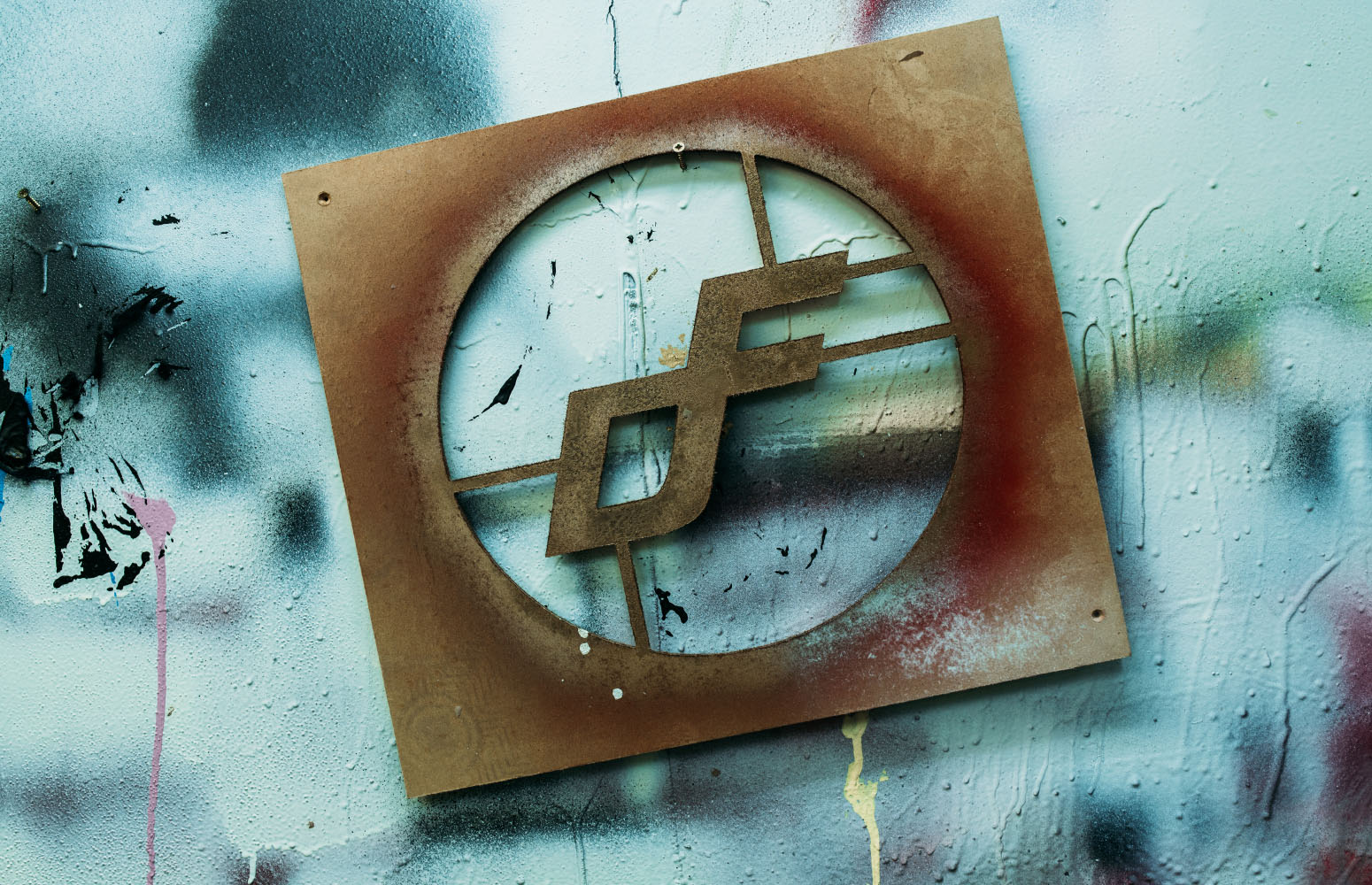 Jobs flow in from two different sources. Our clients either come in with ready-made visualizations and technical drawings from architects, or they just come in with an idea, which we transfer into a design. Then it is literally in the hands of our skilled workshop masters.

We understand and have profound knowledge of different materials, which one to bend hot or cold, how to spray with colours, we experiment with metal. We cooperate with architects, they are young and zealous and work well with the newest software.

After placing an order with your company, what can clients expect?

We will not only render all our knowledge, we will follow through until the tiniest detail. And when we are leaving somebody´s place, we make sure it is clean, so we vacuum and we make sure that everything works fine. When we were working on an ice cream stand we left the place only after the machine started to produce ice cream. Once we worked for a television shop which we left when we had plugged in all the televisions. Beer could be drafted when we left a beer bar. In other words, we are the last to leave. 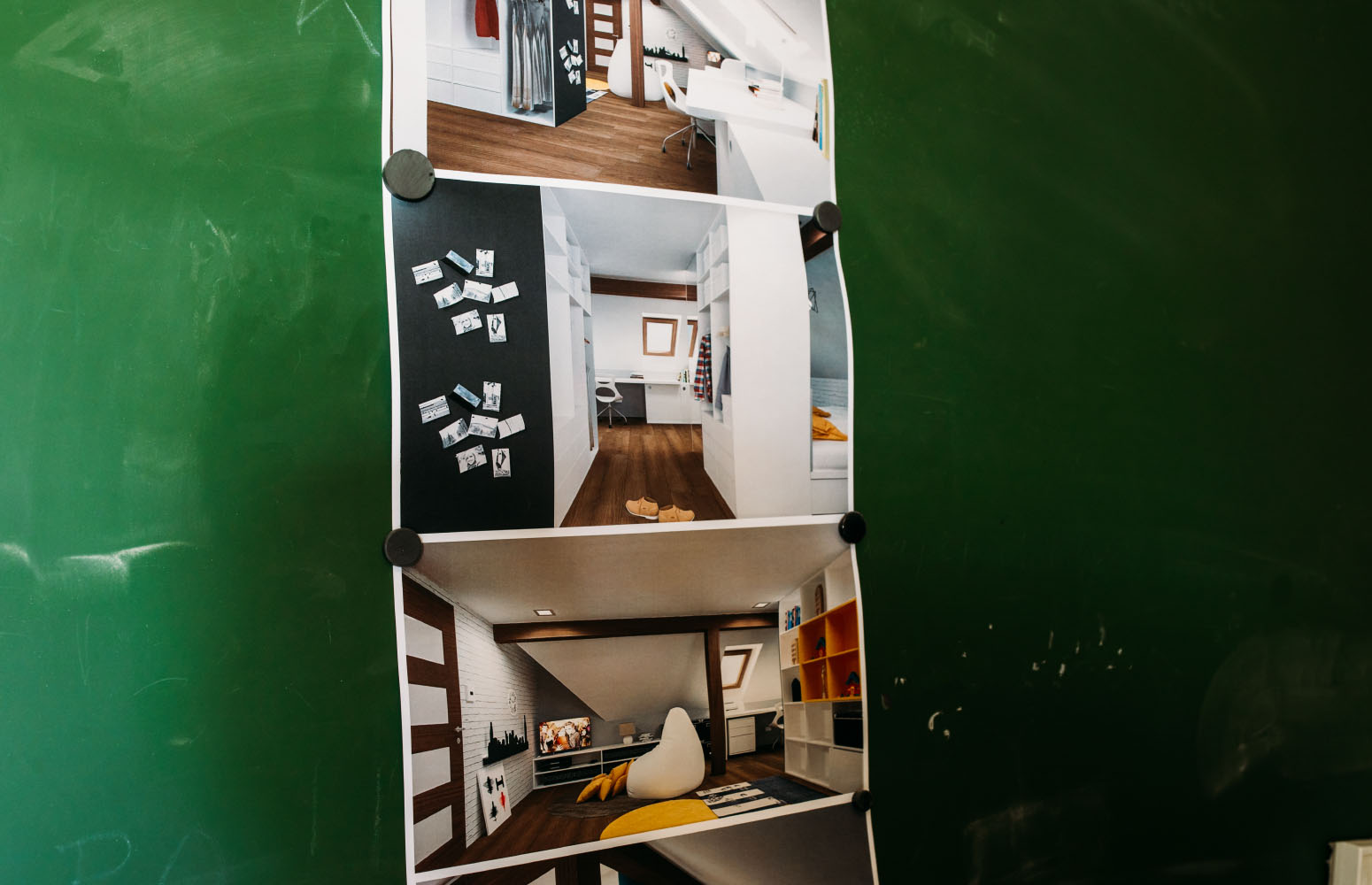 The market is putting a lot of pressure on the prices today. But you can´t put a price on long-term experience. People tend to compare the internet prices as offered by shops and expect us to have the same prices. But it is a different story – we get logs and colour cans and make something out of next to nothing.

I hope the new generation will understand the value of real work. But I am a visionary. Modelling of spaces and putting together bent materials are my favourite nuts to crack. I like challenges.

The expression „ It cannot be done“ does not exist in my vocabulary.

The expression „ It cannot be done“ does not exist in my vocabulary. 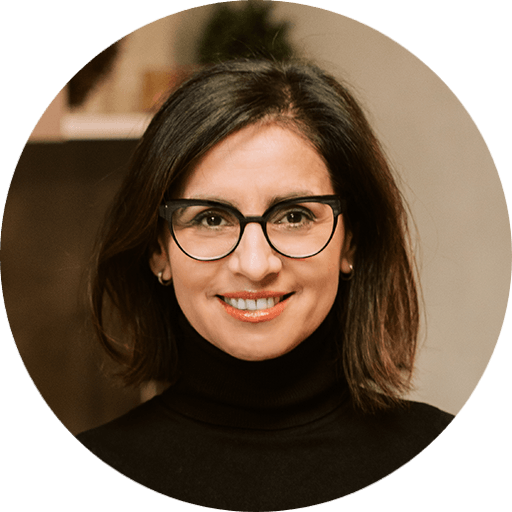